13 Things You Didn’t Know About Tintin And Hergé 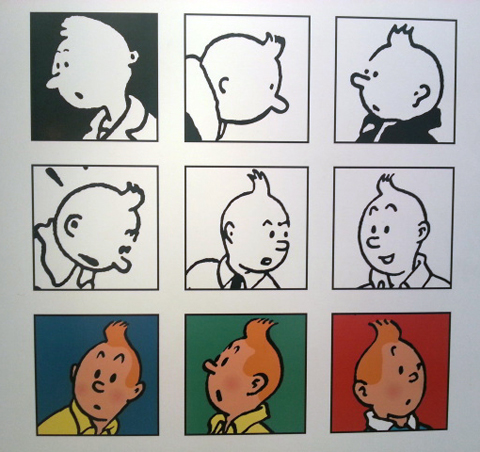 “Tintin is Nobody,” a panel from a special Tintin and Hergé exhibition at the Belgian Comic Strip Center in Brussels | Photo by Joelle Hatem

During a recent trip to Brussels, I visited the Museum of Original Figurines (MOOF) and The Belgian Comic Strip Center, two amazing centers dedicated to the Belgian comic strip and the characters that inhabit it, including Tintin, Spirou, the Smurfs, Lucky Luke, and Marsupilami. I didn’t get to visit the Hergé Museum, a museum dedicated to Tintin’s creator, one of the 20th century’s most renowned artists. But at those two museums, I did uncover 13 facts I didn’t know about one of my childhood heroes, Tintin, and the artist who brought him to life, Hergé.

1. Tintin First Appeared In A Supplement For Children

The first glimpse of Tintin was published in the weekly supplement for children, Le Petit Vingtième, on January 4, 1929, announcing the comic. It featured Tintin walking around the Kremlin with his faithful dog, Snowy.

Tintin’s face is made up of a few very simple features. It’s almost expressionless. Because it’s neutral, it’s the ideal recipient for the emotions felt and projected by readers.

3. Hergé Was Accused Of Racism

Tintin in the Congo (initially, Tintin in Africa) was later criticized for its depiction of “blacks.” The series was called “missionary propaganda,” and Hergé was accused of racism. His reaction decades later was: “It was 1930. I knew the country no more than what the people of the time were told: “Negroes are children… They are lucky to have us there.”

4. Hergé Initially Made Mistakes In The Black Island

In the fantasy thriller The Black Island (1937), situated in Sussex and on the Hebrides, Hergé shows the harder side of himself and lets the childlike Tintin train a gun on two men as he says: “One more step and you’re dead!” This version was soon modified in a nicer “Get back and put your hands up!” The English translators also informed Hergé of some serious mistakes, thus leading Bob De Moor, who collaborated with Hergé on several The Adventures of Tintin albums, to take a research trip through Scotland and England. With the material taken from the field, an updated and modernized third edition was published in 1966.

5. The First Colored Album Was Published In 1941

The end of the world is announced in The Shooting Star (1941), where it appears that an asteroid will hit Earth. The asteroid roars right past the Earth, but some of the debris fall into the Arctic Ocean. Tintin starts an expedition but encounters unscrupulous rivals and mushrooms that spontaneously explode. It was the first album that immediately became colored and published by publisher Casterman. 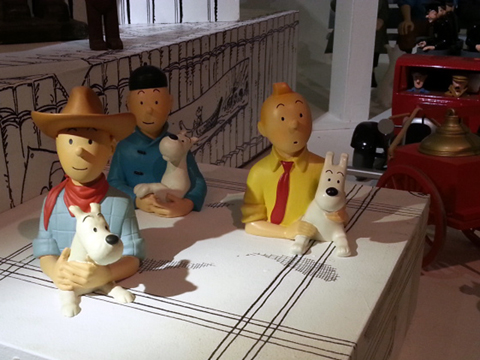 Hergé’s most controversial album is The Blue Lotus (1943). Influenced by his Chinese friend, Chang Chong-Chen, a student at the Academy of Fine Arts in Brussels, Hergé not only immersed himself in Chinese culture, but he also incorporated Chang’s openly pro-Chinese ideologies into the album. The warlike Japan and the Western powers with their concessions in the Middle East and trade in opium caused extreme tensions. Shortly after publication in the Le Petit Vingtième, the Japanese consul in Belgium protested. In the revised edition in 1946, a number of tricky passages were removed, such as a busy street scene that included wall inscriptions as “Boycott Japanese goods!” and “Down with imperialism!”

Hergé became fed up with the many allegations about his war record, and strongly considered the possible end to Tintin as well as emigrating to South America. It was then that publisher Raymond Leblanc offered a helping hand: to compete with youth magazines like Spirou and Bravo. It was decided to establish a similar comic journal with Hergé at the helm. On September 26, 1946, the successful Tintin Magazine came out with 100,000 copies. The magazine supported the immediate sale of the Tintin albums.

8. Hergé Felt He Was A Slave To His Own Success

Over the course of his career, Hergé became increasingly unhappy and felt that he was a slave to his own success. He suffered psychological and physical distress. This is clearly depicted in a drawing from 1947 in which the author looks seriously at an overcrowded drawing table while a fierce-looking Tintin staring at him while holding a whip.

In The Calculus Affair (1954) Tintin and Haddock investigate the abduction of Professor Calculus and end up landing on the shores of Lake Geneva. Immediately thereafter, they come into contact with Bordurians during the Cold War. With this album, Hergé definitively declared an end to his two-part formula, and successfully manufactured a solid story in one book, which only strengthened his reputation as a master storyteller.

In 1969, at the request of Hergé’s British publisher, a third radically altered version of The Black Gold appeared. The publisher was particularly disturbed by the dated elements, such as the view of Jews and Arabs in their struggle against the British and against each other in relation to the British mandate of Palestine in the late forties. The British marines were replaced by Arab military police. 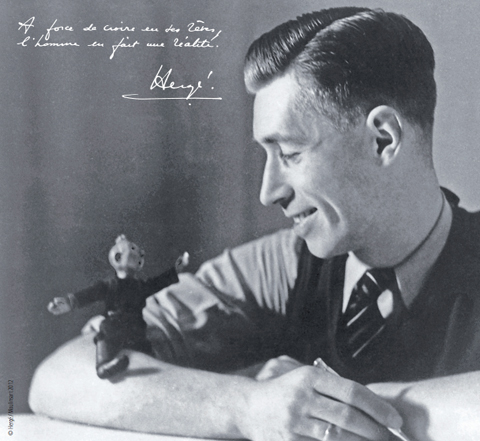 Though he had fanatically documented the travels of his paper hero for years, Hergé never actually visited any of the countries which he let Tintin famously explore. In 1971 and 1973, Hergé decided, along with his wife, Fanny Vlamynck, to travel to the United States and to Taiwan to withdraw. During that period, he also got more and more interested in Eastern philosophies.

12. Hergé Died Before He Could Finish Tintin and Alph-Art

On May 3, 1983, Hergé died from a leukemia-like illness. He was just under 76 years old. In his archives, about 150 pages with sketches, dialogues and notes about Tintin and Alph-Art were found. Attempts were made to find instructions on how to proceed after his death. An old, open-hearted interview removed all doubt: “There are undoubtedly many things that my team and I can do, and some things better than I can. But to bring Tintin to life, to bring Haddock to life, Calculus, Thomson and Thompson, all the others, only I can do that, I think. Tintin (and all the others) – that’s me, just as Flaubert said: ‘Madame Bovary, c’est moi.'” Initially, Bob de Moor wanted to complete the Alph-Art album, but Hergé’s wife, Fanny, made it clear she would abide by her husband’s wishes.

In 1986, the public finally got to view Tintin and Alph-Art, the 24th and last installment in the series, after a team of specialists compressed Hergé’s notes and material into a 42-page album. In 2004, a renewed edition appeared, thanks to some documents found (nine pages), and a new light at the end of the story was cast. Tintin and Alph-Art is a striking departure from the earlier albums in tone and subject, as well as in style; rather than being set in the usual exotic, action-packed environment this story is largely played out in the world of modern art. Artist César Baldaccini, a woman similar to Nana Mouskouri, and the Rajneesh movement play leading roles.